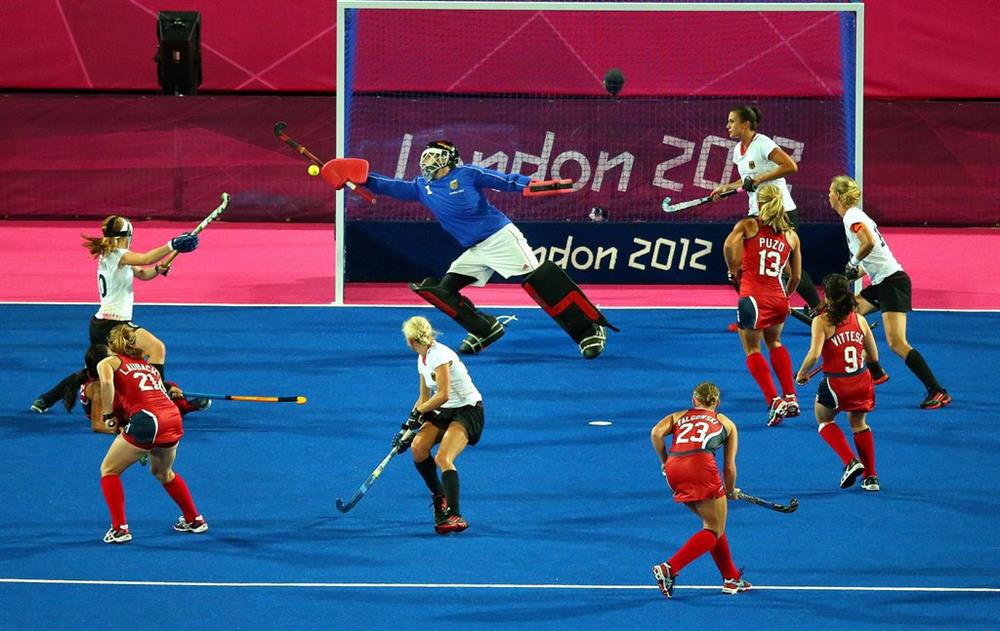 16 yard hit: This is a hit taken by the team in defence 16 yards from the goal-line, after the attacking team hits the ball over the base line

Centre Pass: This is the pass taken at the start of each half to start the game, it is also taken by one team after they have been scored against.

Dangerous Play: This includes any play which could be considered dangerous or cause injury such as a raised ball, illegal tackle or playing the ball while on the ground.

Drag Flick: A move used by a player to take a legal lifted shot on goal during a Penalty Corner

Obstruction: When one player blocks another player from having a fair or equal chance to get the ball.

Penalty Corner: Is awarded to the attacking team for an offense or foul committed by the defensive team in the attacking area. The ball will be placed on the baseline, and then passed to the teammates at the top of the attacking D for a shot on goal.

The D: this is the slang term for the scoring area at either end of the Field Hockey turf.

Penalty Stroke: A shot on goal awarded to one player from the attacking team against the goal-keeper from the defensive team.

Push: This is where a player moves the field hockey ball along the ground using a pushing motion.

Standard Hit: This is where a players moves the field hockey ball by using a swinging movement with the stick towards the ball.

Sweep (Slap) Hit: This is where a player using the similar motion of swinging the stick towards the ball only lower to the turf, in a sweeping or slapping motion.

Scoop: This is where a player raises the ball off the ground by getting the head of the stick under the ball and using a lifting motion.

Tackle: An action taken by one player to stop another player from keeping possesion of the ball.

Shooting circle: This is the semi-circle area at each end of the turf, which extends 16 yards out from the back line of the turf.

Offence: This is an action committed by one team against the other team which is a breach of the rules of hockey.

Free-hit: This is awarded to the team which the offence was committed against.

Flick: A shot which is taken where the ball is raised on goal

Jink: An action used by one player to get the ball over the stick of another player

Drag: An action used by one player to go around another player.

Dribble: This is the way of moving the ball without passing from one part of the field to the other, you can use Open Dribble or Indian Dribble.

Striker: These are the players who play as forwards and mainly score the goals for a team.

Inner/link: These are typically fast running players who play at both ends of the field, in modern hockey they are called midfielders, there job is to get the ball from the back to the forward hence the word Link being used to describe what they do.

Halves: These players play through the midfield, but they also play in defence.

Defenders: These players sole job is to stop the ball and the oppositions from getting into good positions to score.

Goal-keeper: These players are very specialist in what they do, they are there solely to stop shots on goal.

For more information on the sport of hockey check out our Guide to Field Hockey.